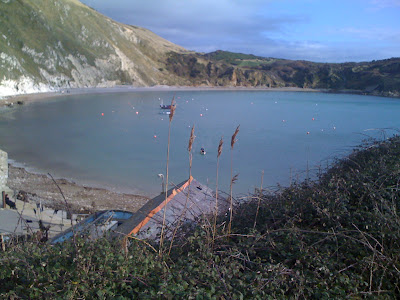 It was my son's birthday on Sunday so we took a trip to the Seaside. He always wants to go to the seaside which, considering his birthday is in November, is sometimes a trial. This year we were very lucky and the weather was beautiful. It was sunny but cold. 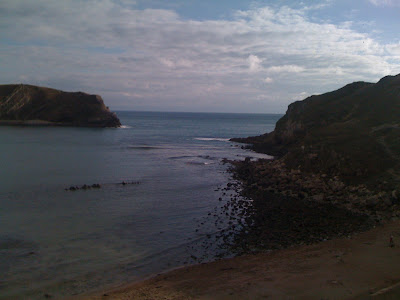 We went to Lulworth Cove in Dorset. We had tried to visit there in the summer but it was absolutely packed. We couldn't even get in the car park. On Sunday, however, it was lovely. There were people around walking dogs and a few people, like us, just visiting the beach. 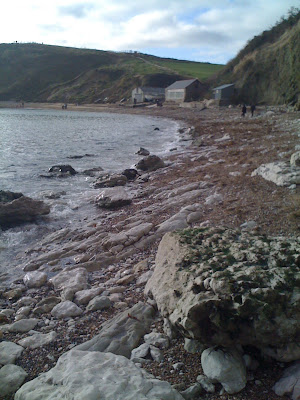 If you look on the hill in this photo there is a little monument type information thing. I walked up that hill to that monument. Unfortunately, I was so shattered by the time I got to the top that I couldn't read what it said! 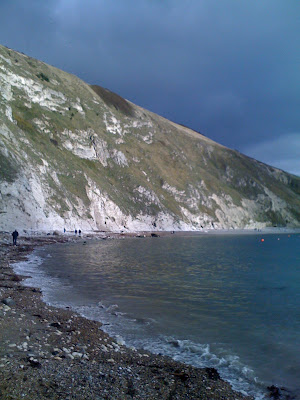 For Thomas Hardy fans, I think this cliff looks like the one where the sheep dogs rounds up the sheep and guides them off of the top to their death. Cheerful hey. 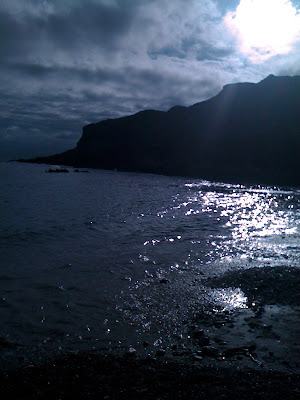 This is my snazzy artistic shot. I don't quite know how I managed this one but I think I just took the photo into the sun. All of the photos where taken on my phone so I am quite pleased with them. I have to admit that my OH took the top two while I was slogging up the hill. It gave him an excuse to stay down at the bottom.
Posted by Where the nodding violets grow at 06:24 7 comments: 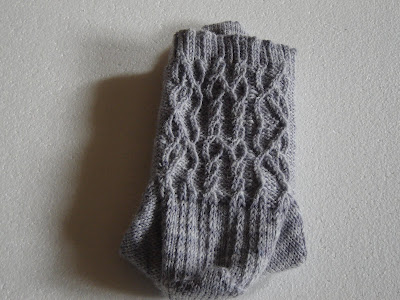 Here is the heel view of my Stonemason Socks by Ashley Knowlton. I did these as a test knit. I struggled a little at first because I have never attempted cabling on a sock before and found it quite difficult on DPNs. I watched a couple of videos on YouTube and learned to cable without a needle. This made life a lot easier and I then really enjoyed the pattern. 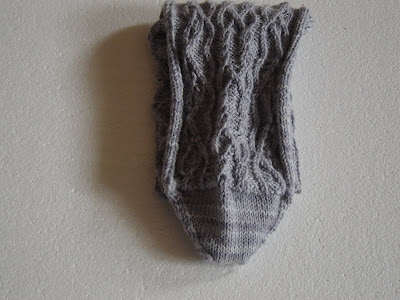 This is the view from the top of the foot. The pattern is beautifully written (do you say that about a pattern) and easy to understand. I will definitely knit the other as soon as I have got my act together. 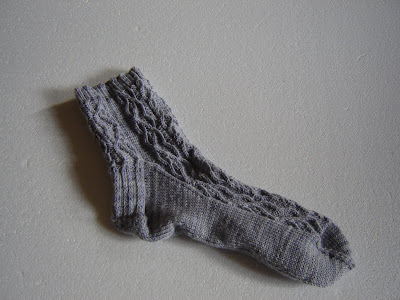 As you can tell from the photos, the stock has not been blocked yet. For those of you on Ravelry my project page is here. 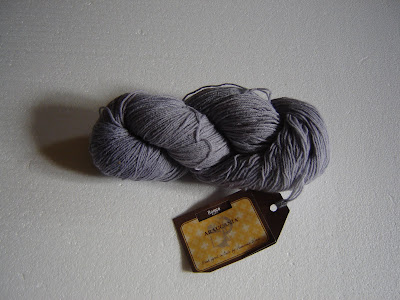 I used Araucania Ranco Solid for the sock. It is a lovely light lavender colour which is not really showing up in the photos. I really liked knitting with this yarn although it did have a tendency to split when I was doing the cabling. I would definitely use it again.
Posted by Where the nodding violets grow at 20:20 3 comments:

I have had a super busy week and it has taken me the last four days to get over it. As you know, I did my trip to Fanderson. I then went to visit my daughter in Manchester with my sons. We did some shopping and went on the Manchester Eye. How touristy. As you can see, it was quite high but I managed to stifle my screams. It was quite nice because we got a pod to ourselves. 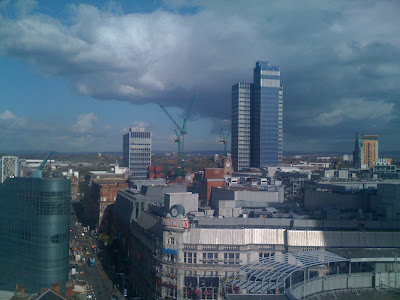 The giddy heights of Manchester
After our day trip to Manchester we then went to Cardiff to see Dr Who Live. What a great show. The music was great. The monsters lurked around the audience which was great fun. Unfortunately we were not allowed to take photos once the show had started 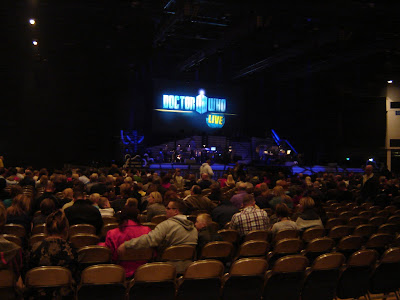 Dr Who Live
At the weekend I did my big trip to London with my son. As I think I mentioned before, he won a competition to design an alien space craft for an online game for Sarah Jane's Adventures (a spin off of Dr Who). We travelled up early on Saturday and made our way to the BBC. 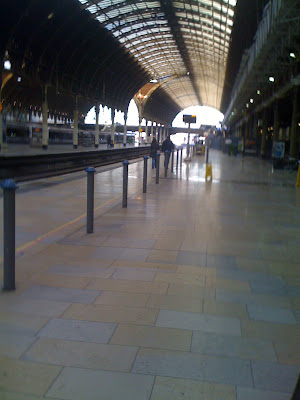 Paddington Station
I dropped my son off at the BBC and then, of course, had to entertain myself until 5.30 pm. I headed for Oxford Street. I originally come from Greater London so I get so excited when I go back. It is so vibrant and full of life. I went to John Lewis to buy some yarn (a story about this to follow) and then to Liberty's. I loved Liberty's. I had forgotten how hot it is in the shops there. I had to stop constantly and take on fluids. I got back to the BBC at 4.00 pm and was absolutely exhausted. 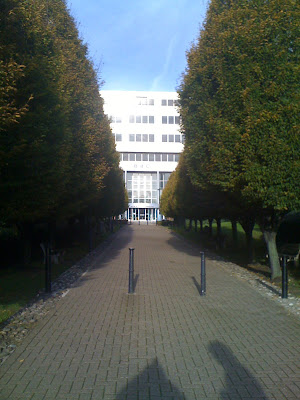 BBC White City
On the Sunday, I dropped my son off again but this time the novelty had worn off a little for me. It was pouring with rain and I had forgotten that nowhere opens until 12 noon on a Sunday. After wandering around for a while I telephoned my OH for assistance and some tips of where to go. He pointed me in the direction of the British Museum. I hadn't been there since I was very young and I loved it. I wandered around for about four hours and didn't actually see anything. I went in every room and sat in various places. I had a drink in every cafe there and spent a lot of time people watching. I left there with a couple of books (History of the World in 100 Objects and The Book of The Dead) and a promise to myself to return with the family (whether they want to or not) so that I can share my excitement with others. 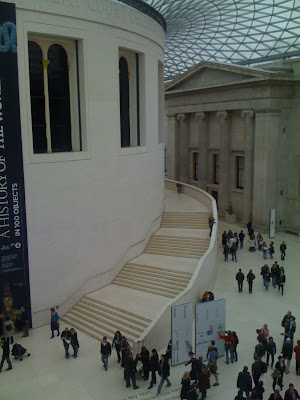 Entrance hall at the British Museum
When I collected my son he was so enthused. He had had a brilliant time. He had shared his ideas with like minded people and learned a lot from them. He felt as if he really fitted in. Who could ask for more than that.
I did manage some knitting. I need something to keep me sane. Knitting posts to follow.
Posted by Where the nodding violets grow at 18:38 5 comments:

Where the nodding violets grow